“Transparency and the Struggle for Accountability in Mexico” 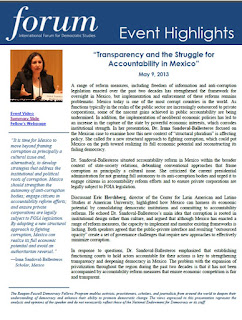 A range of reform measures, including freedom of information and anti-corruption legislation enacted over the past two decades has strengthened the framework for oversight in Mexico, but implementation and enforcement of these reforms remains problematic. Mexico is today one of the most corrupt countries in the world. Meanwhile, as functions typically in the realm of the public sector are increasingly outsourced to private corporations, some of the nascent gains achieved in public accountability are being undermined. In addition, the implementation of neoliberal economic policies has lead to an increase in the capture of the state by powerful economic interests which corrode institutional strength. In her presentation, Dr. Irma Sandoval-Ballesteros focused on the Mexican case to examine how this new context of “structural pluralism” is affecting policy. She called for a new structural approach to fighting corruption, which could put Mexico on the path toward realizing its full economic potential and reconstructing its failing democracy.

Dr. Sandoval-Ballesteros situated accountability reform in Mexico within the broader context of state-society relations, debunking conventional approaches that frame corruption as principally a cultural issue. She criticized the current presidential administration for not granting full autonomy to its anti-corruption bodies and urged it to engage citizens in accountability reform efforts; and ensure private corporations are legally subject to FOIA legislation.

Discussant Eric Hershberg, director of the Center for Latin American and Latino Studies at American University, highlighted how Mexico can harness its economic potential by consolidating democratic institutions and committing to accountability reforms. He echoed Dr. Sandoval-Ballesteros’s main idea that corruption is rooted in institutional design rather than culture, and argued that although Mexico has enacted a range of reform measures, the capacity to implement and monitor existing frameworks is lacking. Both speakers agreed that the public-private interface and resulting “outsourced opacity” create a set of governance challenges that require new approaches to effectively minimize corruption.

In response to questions, Dr. Sandoval-Ballesteros emphasized that establishing functioning courts to hold actors accountable for their actions is key to strengthening transparency and deepening democracy in Mexico. The problem with the expansion of privatization throughout the region during the past two decades is that it has not been accompanied by accountability reform measures that ensure economic competition is fair and transparent.